According to the Protocols of The Hague, international law ruled annexation of land by conquest illegal as from the year 1900. However, between 1900 and 1910, the British Crown warred in southern Africa and committed genocide of various communities in southern Africa. During these wars, the Crown annexed the land, and established the Union of South Africa in 1910. Control of all assets in South Africa was grasped by the Crown, and ownership of most assets of South Africa is still held by Crown members.Independence Commission Africa is calling for an inquest into these historical and ongoing events, claiming the return of wealth taken illegally from the Crown treasury to the South African nation, as well as the disbanding of the illegal system of governance, which was handed down by succession since 1910 by the Crown, to representative puppets of its corporation.
Consequently, we have submitted the following letter to the international courts, permanent UN councils and various organizations and individuals world wide for response, as well as created a supportive petition for our action.
Evidence to support our letter consists of 32 attachments which have been bound in book form due to their volume of more than 4000 pages and are available upon request, as mentioned in the letter. We do, however, offer the individual documents for your perusal below.

ICA letter to the world

Supporting Attachments of Evidence to the ICA letter to the world

All that is required for evil to prevail, is for good men to do nothing! 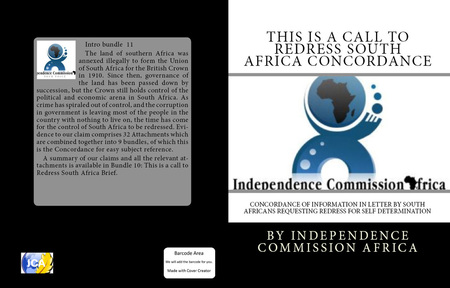 HOW TO USE THE CONCORDANCE:

Different subjects are discussed in our Attachments which are numbered from 1 - 32. These Attachments have been put into 9 Bundles to be able to print them as books.
The Concordance lists the subjects alphabetically and shows in which Bundle the subject is discussed, for example, when looking up the word "Eskom" you will find "Eskom B.9 pg 146" which means that Eskom is discussed in Bundle 9, on page 146.
Bundle 9 is made up of 4 Attachments, namely numbers 27, 28, 29, 30.

Each Attachment has a number of pages in it. In our example of Bundle 9, on page 146, we will find page 146 is in Attachment number 27, when we look at the contents of the bundles which are as follows: